This page is put up as a community service to promote Hampshire County's Civil War Soldiers Memorial Historic Site. We include here the address given on the 150th anniversary year of the dedication of the Monument to the fallen heroes of Old Hampshire County. Below that text are small images of the event. If you simply click on the thumbnail image the larger one will load in your browser. Please Note: These are large images formatted for what is becoming the standard computer monitor size - High Definition 1920x1080 pixels. The file size is between 180 kb and 350 kb. They will take time to download depending on your Internet speed. If you right click on that image and choose "Save image" you can download the larger, high definition image to your computer.

Thank you Mr. Mayor for the introduction. When Brenda Hiett asked me to speak at this ceremony I replied I would guarantee a talk something like Gettysburg - I simply meant something between Mr. Lincoln's two minutes and Mr. Everett's two hours.

It is an honor to be here today for this celebration on the 150th anniversary year of the erection of this monument to the Confederate dead of "Old Hampshire." For those who may not know - that phrase refers to the area of Hampshire County when it included parts of surrounding counties before it was reduced to its present size. The Monument was dedicated in September, 1867 in the park-like setting of this then recently opened Indian Mound Cemetery. After the ravages of the Civil War in a town that changed hands so many times, this was probably the most peaceful place available. As far as we can tell, the ceremony of honoring these dead has continued without interruption every year since then. We can be proud for few communities can claim a 150 year long tradition like this.

As generations pass and times change we should ask ourselves, "Why was this monument erected and what does it mean?" That is a complex question, which, - particularly in this day and age, - needs some thoughtful consideration. In a time when some people are pulling down old monuments in order to "correct" history, we need to know that history can not be corrected or changed. It is what it is. It can and should be studied so that its lessons can change us. Of course, one needs to be aware of the problems of viewing history through the eyes of the present or of glazing it over with thoughts of "what might have been." But that is not what this Monument is about.

It reminds me of the altars and monuments raised by the patriarchs of the Bible that I read about in the Old Testament. Abraham (who later had a child by his slave girl as he tried to fulfill God's promise his own way) built one at Shechem and one at the terebinth of Mamre after the Lord promised the land to him (Gen 12:7; 13:18). Isaac built an altar at Beersheba when God renewed the promise of the land to him as the son of Abraham (Gen 26:25). Jacob (who stole his brother's birthright) set up a memorial stone after he had wrestled with the angel (Gen 28:18). Joshua set up one after the Israelites (who had grumbled against God and therefore had to spend 40 years in the desert) crossed the Jordan dry shod with the Arc of the Covenant and entered the Promised Land.

These monuments were built to remind not only the builders of what God had done, they were to remind generations yet unborn and unbegot of their history. The interesting point is that these patriarchs were not perfect people. They were, in fact, like us: men with sterling qualities as well as human weaknesses - men with moments of faith and honor - and virtue and glory as well as times of failure and shame.

Just so, this monument that we decorate today was raised to men like us by people like us. We can remember their moments of valor and glory, and we can recall their faults and failings. We can recall the faults and failings so that we will be encouraged never to fall prey to the same errors. But what we note most of all today is that these men gave their lives for what they believed in, what they held dear. That is the lesson we need to remember. We remember it so that we, with all our faults and failings, will be able, like them, to dedicate our lives to what we believe is a noble cause - that we with our own self interest, may be able to sacrifice so that others may be safe in home and hearth. That is the noble lesson for us to learn.

As a local historian I would like to offer you a suggestion to make something more special of this celebration. Actually, I have three suggestions:

1. You see, the names on this monument are really stories waiting to be discovered and retold. We can find a special benefit from this day of we at some point take the time to study a story, take the time to live for a moment in the shoes of one of these men. It does take some doing and a bit of time in the library or online, but try to research one of the stories or search out a descendant to ask and then hand it on to someone else. The stories should live on.

2. We celebrate this year the 150th anniversary of the erection of this monument. In the coming months as our plans progress - and, unfortunately, they are progressing very slowly, - become part of the project to preserve this monument so that 150 years from now people will be able to see something similar to what we see - instead of just a weathered slab with unintelligible names. We are not the end of the line. We stand in a long line from 1867, and we have a responsibility to pass on to future generations what has been given to us.

3. Finally, I would suggest that whenever you talk about this monument and all you believe it stands for - which may be not exactly what others believe - I suggest that you do it with civility. This is an age too quick to find fault, - to eager to "one up" the other person, - too fast to shout down opposing views. The rule I hark back to was written by someone who traversed this valley long ago - well before the Civil War, - a young man learning the work of surveying. The first "Rule of Civility" he penned in his work book as a school boy was:

"Every action done in Company, ought to be with some sign of respect, to those that are present."

We can all learn from Mr. Washington.

If we Americans today are civil with each other, then perhaps this monument can again signify the reconciliation it saw after the Civil War. We have only to imagine the meeting of the old Ringgold Cavalry members of the 22 Pennsylvania Cavalry and the Hampshire Confederate veterans during that trip when the Ringgolds stopped in Romney on their way to the large reunion in Moorefield in 1901. I was struck by the comments made by one McNeill's Ranger in an article appearing in the Confederate Veteran Magazine of 1929 concerning that reunion:

The big day was well filled with a varied program. One outstanding feature was the greetings, fellowship, and reminiscent speeches in the courthouse. The speech making, which expressed the sentiment of good will and united friendship, drew the longest and loudest applause, though a close second to it was the severity with which both sides scorned the cowards who were silent and inactive, if not invisible, during the war and who, since the war, have been most industrious in stirring up bitterness and maintaining strife. The men who were on the firing line and who know what war is have been the first to "bury the hatchet" and promote peace.

I hope that we can be of that last group.

I hope that after the ceremonies here you may find the time today or in later days to walk among these stones and search for stories. We have veterans here not only of the Civil War, but from most all wars from the American Revolution to our most recent engagements. We all have much to learn in our short lives, and these stories can often be a helpful prompt to turn us toward more noble thoughts and actions. Have a good day.   Thank you. 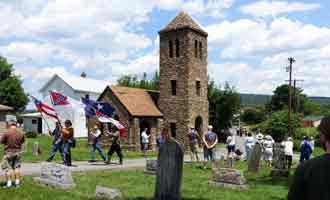 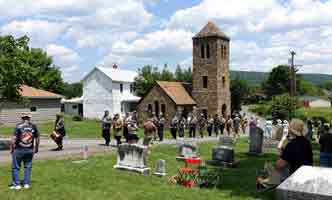 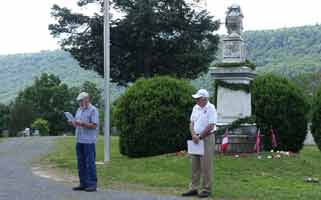 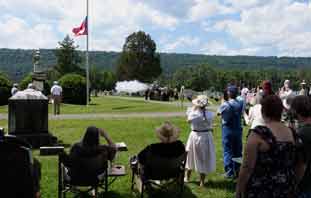 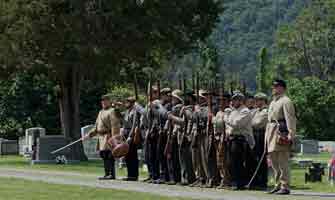 At times HistoricHampshire.org feels a responsibility to comment on various questions of history that appear on this site. We feel it necessary to comment on the placement of a marker that suggests that Alfred Whiting was a soldier in the Confederate Army. The obituary on our web site clearly states that Mr. Whiting served "as the body servant of Isasc T. Brady." This was not an unusual situation in that time. There is no document that suggests that he served in any other capacity. 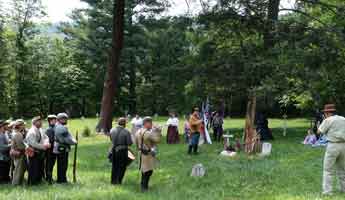 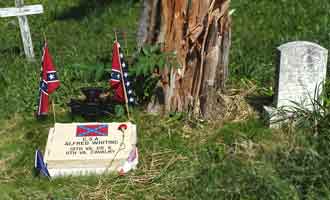 Program for the 2017 weekend ceremonies

The U.S. Department of Veterans Affairs has a history of Decoration Day that can be seen by clicking here.


Our reenactment group is the 13th Virginia Infantry, Company I