The first public school in Romney was taught in 1864-65 by Rev. O. P. Wirgman. The schoolhouse was the law office of A. W. Kercheval. This was a part of the house on Gravel Lane lately owned by Mrs. George Hawse.

In 1866 the school board bought the old Episcopal Church on Grafton street which had been used a number of years previously by the M. E. Church. O. P. Wirgman continued to be principal, assisted by Mrs. Gertrude Corbett.

Many of the principals served several times in succession and at different times. This is also true of several of the assistants. Until in 1880 the school term was only four months in length. That year the term extended to six months.

Col. William Perry assisted by David Marshall succeeded Rev. Wirgman in 1866-67. Mr. Reed followed Col. Perry with no assistant. He was succeeded by a Mr. Collins, who had no assistant, since there was but a one room school.

The following two years (1870-72) Miss Kate Steel was principal but she had no assistant. She was followed by Miss Laura C. Strider.

In the year of 1873-74 J. H. Springston was principal with Miss Anna Vandiver as assistant. However, after one month he became ill and Mrs. Kate Steel White completed the term. About this time the room was divided into two rooms by a partition through the middle of the large room. Mrs. Kate Steel White continued as principal in 1874-75 with Isaac Ewers as her assistant. The next summer the partition was removed and another class room was made.

From 1875-76 Cal. B. Cook was principal. He was assisted by Miss Laura C. Strider. The principal taught in the large room in which all the pupils were seated. Classes went to the class room to be heard by the assistant.

Progress in another phase of Romney School history also took place the year of 1878-79. The schoolhouse was divided by a lengthwise partition and the class room was left intact. Miss W. C. Dodson principal and three teachers were now employed, Miss Jennie Vandiver and Miss Emma Wirgman assistants.

The next year Mr. James Johnson was elected principal with Miss Ella Scanlon and Miss Lucy Brown as assistant teachers.

T. G. Pownall was elected principal in 1886-88. He was assisted by Miss Ella Scanlon and Mrs. Lucy Brown Rubl. W. W. Stickley was elected to teach but resigned after a period of two months as an assistant.

The next years, (1891-94), J. W. Neel was elected principal, C. H. Cookus and Miss A. O. Endler assistant teachers. The third year the only change made was when Miss Dora Poling took Mr. Cookus’ place as assistant. Mr. Neel went to teach in the School for the Deaf and Mr. Lorenzo Emmert took his place as principal.

In the year of 1903-03 F. A. Byerly was principal with Misses Carrie B. Fox, A. O. Endler and Hallie Kuykendall as assistants. At the time it became necessary to employ another assistant for the principal, and Miss Ann M. Gibson was chosen.

The largest of the three rooms was partitioned to make another room. It was noted in passing that the primary teacher, Miss Kuykendall, taught in the building which J. A. Gibson had built for the post office when he was postmaster. This building is still standing on the lot owned by Mr. C. D. Seaton.

Mr. Byerly served in 1903-04 with James V. Cowgill, Mrs. Grace Pownall, Miss Mary Blue, Miss A. O. Endler and Miss Nancy Kuykendall completing the staff. Miss Kuykendall taught in the room which had been occupied by her sister.

In the year of 1904-05 F. A. Byerly continued as principal with Mrs. Grace Pownall, Miss Mary Blue, Miss A. O. Endler and Miss Nancy Kuykendall as assistants.

At this time it was decided to buy a lot and to build a new school house. The four front rooms of the present grade building were built. 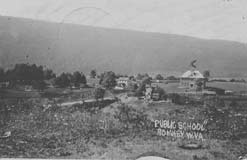 In the year of 1905-06 J. B. Martin was principal with L. H. Brill, Miss Myrtle Bennett, Miss A. O. Endler and Mrs. Pownall taught the primary grade in a room in the old building as there wasn’t enough room in the new school house.

The next summer two more rooms were added at the back of the building. They are the present fourth grade rooms. The large room above was used as an assembly room.

J. B. Martin was again principal in 1907-08. He, with Ira V. Cowgill, Miss Ada Poling, Miss Myrtle Bennett, Miss A. O. Endler and Miss Nora Thompson made up the staff of teachers.

The next year (1910-11) Ira V. Cowgill was re elected principal. Floyd Ours, Misses Ada Poling, Anna Ruckman, A. O. Endler and Mayme Leatherman completed the staff.

The next year (1913-14) was the same principal assisted by A. S. DeHaven, Misses Pearl Elosser, Lucile Hobb, A. O. Endler and Charlotte Stump. Miss Hobb’s health failed and Miss Mary B. Keller finished the term. 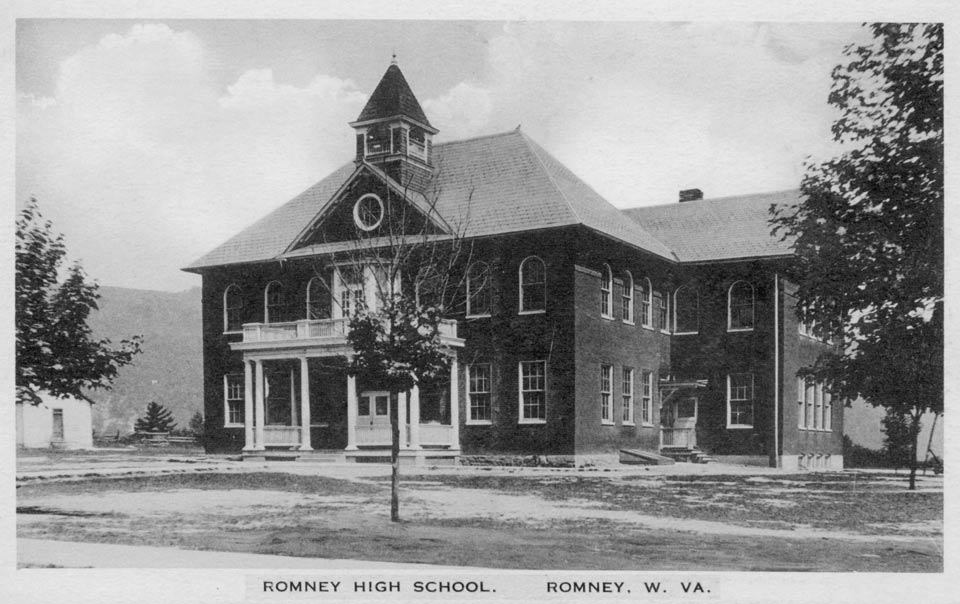 Mr. O. W. Snarr had eighth grade commencement exercises in the chapel at the School for the Deaf and Blind. We should give Mr. Snarr credit for establishing the high school, as he had been working on a movement for a high school in Romney. Although he was met with discouraging remarks from those whom he approached on the subject, his was a pathetic appeal for a new high school in which they could continue their education.

J. J. Cornwell had consented to make an address in behalf of a high school. But when he had heard the paper read by Daisy Goldsborough, it caused him to change the address which he had prepared. He, too, made an eloquent appeal for the young people, pleading with the board and the tax payers present to grant their request for a new high school.

At the close of the speaking Mr. Sloan Kuykendall, president of the board, said, “We will grant their request. Will you tax payers vote for the levy?” The reply was “Yes.” An extra levy was made for two years.


(continued next week) - [Part Two will be posted as resources permit]