Click on pictures to enlarge; use browser's Back button to return! 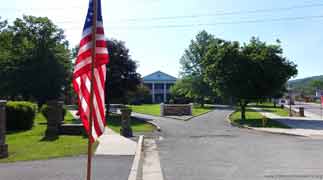 The pre-Civil War Classical Institute Building was the center section of what became the Schools for the Deaf and Blind. Later it became the Administration building.

In the early morning hours of February 26, 2022 the Administration Building of the West Virginia Schools for the Deaf and Blind was destroyed by fire. For photos go to: Hampshire Review
See more photos in the Hampshire Review of March 2, 2022, front page and page 8C.

This building is one of the most historic buildings in Hampshire County, West Virginia.
On Dec. 12, 1846, the Virginia Assembly empowered the Romney Literary Society to establish a Seminary of Learning near Romney. This was to be known as the Classical Institute. The Romney Academy and the library of the Literary Society moved. Dr. Foote ran the school until a dispute developed between him and the Literary Society and he left in 1849. The Potomac Academy started in 1850 and is today the Blue & Gold Dining Room on the north end of campus. Both schools were busy until war broke out in 1861 and most of the students and teachers left join the conflict. After the war, the town was not to be the same since 125 of its young men were killed, many of them former students. Romney was devastated during the war and economically struggled afterwards. When the state needed a school for the deaf and blind, the Literary Society reformed and pushed for the school to be in Romney. In the fall of 1870 the school opened. The rest is history.
Source: Historic Hampshire, edited by Seldon Brannon.

The images below are quite large and will take time to download. Best viewed with your browser in full screen mode. Use your browser's Back Button to return here. 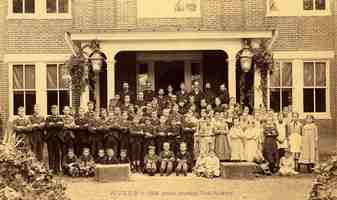 View from rear of building:

We have on the site a set of the old Sanborn Fire Insurance Maps of Romney. They show the School building in some detail. Sections of the Administration Building are shown below, but the whole maps are available here.

For some more photographs of the West Virginia Schools for the Deaf and Blind Click Here.

For the article on the laying of the Cornerstone of the main building in 1871 Click here. We appreciate the research of Dan Oates who pointed out this link to us from the South Branch Intelligencer. The image is from the Library of Congress web pages: Chronicling America.

For our web page on the West Virginia Schools for the Deaf and Blind Click here.

The official WV Historic Site Inventory Form HM-0053 for the Schools for the Deaf and Blind can be downloaded here. It contains two early reports outlining additions and modifications to the original building. It is suggested you download it directly to your computer since it is a very large 15 mb file. The form is available courtesy of the State Historic Preservation Office.


The following timeline for the Administration Building is found in West Virginia Schools for the Deaf and Blind: A History, 1870-2004


We would appreciate your help with dates related to the building