West Virginia Schools for the Deaf and Blind

Main building of the Schools for the Deaf and Blind

This building was once the old Romney Classical Institute build before the Civil War. The photo below shows the original building before it was renovated for the School. Below that is a picture of the early school building that has a third floor added. 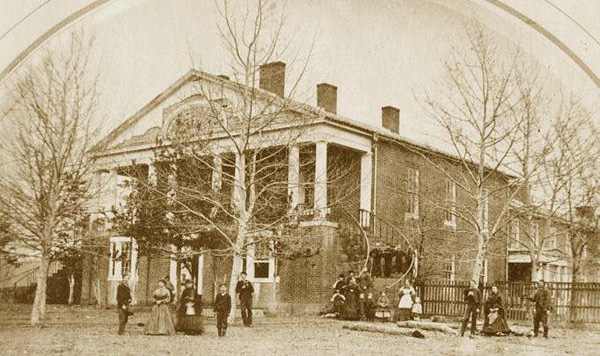 Timeline for the Schools

This timeline was passed on to HistoricHampshire.org several years ago by someone from the Schools. We appreciate their cooperation and would hope that others will help update/correct/expand this list. Thank you.


When West Virginina Became a state in 1863,

blind and deaf children were no longer eligible to attend the Virginia School for the Deaf and Blind. During the next seven years some blind and deaf children attended special schools in neighboring states with West Virginia paying their tuition. A few attended the publics school, but most of them received no schooling at all.
In 1869 Howard Hill Johnson, a blind man from Pendleton County, began a compaign for the establishment of a school for the blind in West Virginia. His efforts were successful and on March 3, 1870, the West Legislature at Wheeling, the then capital, passed an act providing for the establishment of a school, not only for the blind, but for the deaf also.

It is interesting to note that prior to the Civil War the first student to enroll in the Virginia Institution for the Education of the Deaf, Dumb and Blind located in Staunton was Elizabeth Baker of Pendleton County on November 30, 1839.

Winter 1871-1872 Two three story wings were added to the original building and it was raised to three stories. BFEHWVSDB p. 26

July, 1874 Major John C. Covell, at one time superintendent of the Virginia school at Staunton, appointed Superintendent; served till his death June 4, 1887. [WVLHB&M&OR-1920]
--1874 Steam heat was installed as was an artificial gas machine for lighting; pipes laid for water to be brought from a spring on a farm west[?] of the river about two miles from Romney. BFEHWVSDB p. 26

1888--C. H. Hill again tendered the position of superintendent in 1888; served till July, 1897. [WVLHB&M&OR-1920]
--Ribbon-cutting ceremony for the elevator in the school building.
--September Mr. Ralph Brewer resigns as principal of WVSB to become Director of the Tennessee School for the Blind.

1895--Blind students numbered 83.
--"The contracts for furnishing beef and wheat for

the school for the deaf and the Blind at this place were let, by the principal, at his office, yesterday. Samuel B. Parker was awarded the beef contract for $6.27 per hundred pounds and N. B. Guthrie, of springfield, was awarded the contract for furnishing the wheat at 69 3/4 cents per bushel."

1897--During the administration of Superintendent C. H. Hill, the schools name was changed from Institution for the Deaf, Dumb, and Blind to West Virginia Schools for the Deaf and Blind.
--July, 1897 James T. Rucker appointed Superintendent; served till January 1, 1910. [WVLHB&M&OR-1920]

1898--"The telephone line between Romney and Cumberland, Maryland, has been completed. The line between Romney and Capon Bridge is also finished. Romney will be the central office of the two lines, and of the Moorefield line and the Burlington-Keyser line. Cumberland can now talk direct to Capon Bridge, Moorefield or Keyser, the central office being equipped with the most approved switch boards. Among the telephone stations are August, Pleasant Dale, Hanging Rock, Springfield, Frankfort, Patterson's Depot and North Branch.

1899--On the West side of town on the Northwest Road, the walkway was improved. It was described as follows, a "pleasure walk of the whole community and especially of our pupils."
--November 3, Mandolin and guitar classes, under the instruction of Miss Daisy M. Loeb, are making excellent progress, recitals are every two or three weeks.

1900--James T. Rucker title changed from principal to superintendent.
--January 13, Principal Rucker's comment in the tablet: "Although we have but one day off at Christmas and one at New Year, it is not uncommon to feel the effects of the demoralization in school work after the holidays."
--February 1,7 Due to the rapid spread of small-pox in West Virginia, WVSD&B requested that families discontinue correspondence with pupils and officers of the schools.
--April 28, The price of the entire Bible in New York point, in eleven volumes, was seven dollars. The price of a single volume was seventy-five cents.
--November, A class in typewriting was formed. It consisted of seven pupils in the senior class and one typewriter.

1901--June 1, Governor White passed through the valley last week and stopped to visit the schools for a few minutes.
--Farm purchased.
--School put under State Board of Control. Pupils' academic and conduct grades published in the weekly tablet.

1904--List of officers and teachers included in the Tablet for the first time.

1915--September 25, School opened this term with the largest enrollment in the history of the institution with 264 pupils.
--Oct 9, At no time in the history of the school have we been so well supplied with textbooks in point.
---December 4, Miss Helen Keller has accepted Henry Ford's invitation to go to Europe as a member of his peace mission, which is scheduled to sail on the Steamer Oscar II today.

1916-- May 17, Helen Keller visited The West Virginia Schools for the Deaf and Blind. The following article was published in the June 1, edition of the Tablet:

"The celebrated Helen Keller was a most welcome guest to our little mountain town. Many people motored in from surrounding towns and gave her a very warm welcome.
"Every one enjoyed Mrs. Macy's lecture--and when Miss Keller came on the stage she was greeted with applause which she told up she could feel through her feet.
"After her lecture she answered many questions, and read the lips by placing her first finger on the lips and her second finger on the nose. She repeated each word as I spoke it--or group of words, though I had never spoken to her before.
"The second morning after her lecture she came up to the school with her attractive and cultured secretary, Miss Thompson, and spent an hour with our children, deaf and blind together. She talked and spelled and recited, read the lips and answered questions and was a most alert and interested person. She spoke German for us and her pronunciation was perfect. She "listened" to our teacher of singing (for the blind) Miss Drinkworth, and told us what she "heard"--through those marvelous fingers of hers. Her touch is so light and soft and delicate that one does not notice the contact in talking or singing.
"Miss Keller visited many West Virginia towns and cities. At Wheeling a reporter asked to see her. It was late at night, however, so she sent the following message: "If the men of West Virginia are as well educated as I think they are, the women will be given the vote next fall."
"It is announced that Miss Keller will speak at the Republican National Convention in Chicago on June 7th."

1918-1919--One of the worst epidemics of influenza occurred. One hundred ninety pupils and one half of the employees were ill with Spanish Influenza. Two girls and one boy from the deaf school died here after brief illnesses.

1920 --April Seldon Brannon was named on the Honor Roll.
--June Although a small outbreak of scarlet fever interfered with the closing exercises, it was not an epidemic.
-- H. F. Griffey was superintendent, and Miss Susan J. Stump was principal.
-- The Hampshire County courthouse was torn down and an new one was erected on the site.
--Christmas holiday for the pupils was December 25, 26 and 27.
--Industrial Department included broom-making, weaving, hammock-netting, chair-caning, and basketry.
-- Attendance at the school for the Blind was 78 students; 52 boys and 26 girls.

1921--January 21, Governor Elect Judge Morgan speaks to the students about the value of education.
--70 year old Wm. McLaughlin, a former student, was shot and killed near his home. He had for years lived the life of a recluse. It was known that he carried about on his person a sum of $900, which had been left to him by his mother. The murder dragged the body into a hollow, trying to hide it, where it was found the next day.
--The old canning house was replaced by a larger and better building.
--Work was progressing nicely on the new dormitory building.

1921--September 16, All students attended the laying of the corner stone for the new dormitory for the blind. Some things placed in the corner stone were: New York Point, Braille alphabets, the names of teachers, officers, and the pupils of the School for the Blind.
--November 1, Charles O. Hiser became principal.

1923--Opening of the new school for the Blind Building.
--A new radio was purchased; General Electric was selected as being superior to others.
--Student, Seldon Brannon, had an eye removed at a Cumberland hospital.

1924--A new electric signal horn was installed which was loud enough to be heard all over school property.
--The victor talking machine, the first phonograph was purchased at the school.
-- 75 students were present.
--Work is divided into three departments; literary, industrial and musical.
--The school has two organized literary societies.

1927--Student Eulah Watson dies from failing health.
-- M. Albert Thomas invented a photoelectric machine for reproducing Braille.
--AFB attempted to arrange with one of the large broadcasting stations for a definite time to be set aside called "An Hour for the Blind" which programs would be offered that were of interest to blind radio fans.
--Senior class valedictorian was Seldon Brannon.

1928--Mr. Linthicum placed the cables on the new track just before a big snow storm March 17.

1929--More than 55 of the 92 students were confined to their room during a flu epidemic.

1955--West Virginia Schools for the Colored Deaf and Blind merged with the schools in Romney.
--Dining room and recreation room added to Seaton Hall. These facilities were occupied on November 19, 1958.

1963--Ground breaking for classroom building for the Blind.

1964-- First classes held in the new classroom building.
--First electric heat was used at WVSD&B. November 30, 1964
--First lunch served in Potomac Academy, the first classroom building for the blind.
--Two room in the girls' dormitory were remodeled for sewing and cooking.
--Administration building offices and superintendent's apartment were remodeled and refurnished.

1966--Eldon Shipman became superintendent.
--Funds were secured for the academic-vocational Building for the deaf.
--Salaries for school employees were increased.
--First WVSB Orientation and Mobility classes for the blind were held. Two instructors were employed.
--The first Parents' Institute for pre-school deaf and pre-school blind was inaugurated.

January 1, 1980--Mr. Ralph Brewer became principal of the School for the Blind.
--May, First International Day

1984--October 11-12, First fall conference. "Lets Advance Together" was the theme.
--May, Cover of the TABLET--"A proud Chuckie Cunningham of Farmington helped carry the Olympic torch during the trial run through Morgantown earlier this spring. Chuckie, a third grader at the school for the Blind, was accompanied on the run by his father Charles Cunningham, left, and John Heidbreder of Glen Gardens, New Jersey, an AT&T Information Systems employee. Chuckie was asked to participate by the Morgantown Telephone Pioneers because of his past performances at the annual sports Jamboree."

1985--January, Initial installing of the mobility pass system.
--March 1, Opening of the Children's section of the library.
--Beginning of the Insight program at the School for the Blind and Sky High Program at the school for the Deaf.
--November 5, Because of the 500 year flood, students had extended homegoing and the staff did not work for a few days.

The Background, Foundation and Early History Of The West Virginia Schools For The Deaf and Blind prepare by a committee of school staff.

To see some old photographs of the Schools for the Deaf and Blind Click Here.

Sanborn Fire Maps showing changes to the WVSDB campus 1894-1931; click on thumbnail for larger view (takes time to load then scroll up and down)

Check the Timeline for the School Barn Project

For the Alumni Association *link dead*.